Faculty of Land and Food Systems
COVID-19 Information: For the latest information from UBC, please visit covid19.ubc.ca. Information for LFS students is available here. Resources for faculty & staff are available here.
» Home » Bond between cow and calf grows deeper when suckling is allowed

Bond between cow and calf grows deeper when suckling is allowed 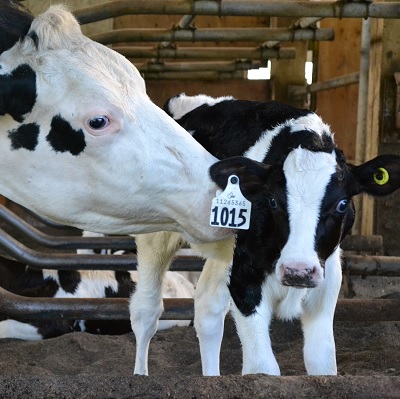 Bond between cow and calf grows deeper when suckling is allowed

August 28, 2020 – A new study from UBC’s Faculty of Land and Food Systems measures how strong a bond develops between a cow and her calf based on the amount of time spent together and whether suckling takes place.

“Previous studies suggested that a strong cow-calf bond can be established even in the absence of suckling,” says Professor Dan Weary. “But our results show another dimension – that the activity of suckling dramatically increases the bond between mother and calf.”

“Oxytocin, known as a bonding hormone, may be the main reason,” said Margret Wenker, PhD student at Wageningen University & Research, and a co-author of the study. “Oxytocin is known to be increased when a mother feeds her young and it has a rewarding effect – suckling is considered one of the most hedonic maternal activities.”

There was no noticeable difference in motivation between the cows that weren’t suckled and those that didn’t see their calves regularly. Also, all cows showed similar behavior once reunited – licking their calves and being attentive.

On many dairy farms, the calf is removed from the cow soon after birth, but as Weary explains, “Some dairy farmers are interested in trying to keep calves and cows together; our results suggest that an important feature of the cow-calf system is that the cow is able to suckle her calf.”

Click here to watch a video of the research.