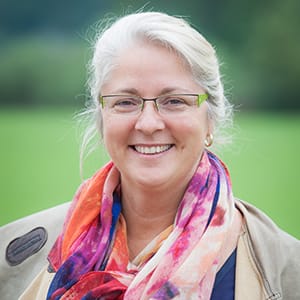 Nina’s love of animals began at a very young age while growing up on a beef cattle ranch in British Columbia . After leaving the ranch, she went onto complete her undergraduate in agricultural sciences at UBC, and her M.Sc. in Animal Science at the University of Alberta. She returned to Vancouver to complete her Ph.D. in Animal Sciences at the University of British Columbia.

Nina joined the UBC Animal Welfare Program after obtaining several years of experience as a research scientist working for the animal feed industry and was appointed as a NSERC Industrial Research Chair in 2008, and is recognized internationally for her research on care and housing for dairy cows and calves.

Nina also recently co-authored the definitive scholarly text – The Welfare of Cattle – in her core area of research (Springer Verlag, 2008). Because of this work as an educator on farm animal care, the impact of her research can now be seen on farms around the world.

Dr. von Keyserlingk’s studies have focused on the under-researched areas including behavior, housing and management and how these contribute to animal health and welfare of dairy cattle. For more details, please visit the Animal Welfare Program website .