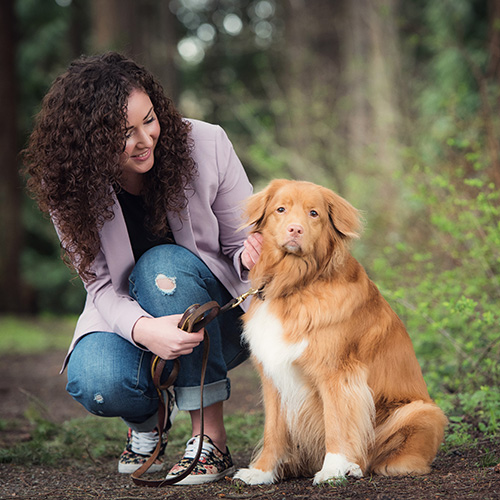 Katelyn Mills always planned to go into veterinary medicine. But as a student in our Applied Biology program, her career path took an unexpected turn after she enrolled in a research methods class with UBC Animal Welfare Profs. Nina von Keyserlingk and Dan Weary.

“I never thought a career in research was something I wanted, but that course changed things for me,” said Mills, who graduated with a BSc in Applied Biology in November 2015 and is now working as a Research Assistant in the UBC Animal Welfare program. “The Applied Biology program gave me the opportunity to design my degree, which is very different from other biological sciences programs."

Part of designing her degree meant that Mills had the freedom to work on a directed-studies project. Last year, she spent four months conducting a literature review of unnecessary surgeries on companion animals, the results of which were published in the January 2016 issue of The Journal of the American Veterinary Medical Association.

“There’s a lot of information on controversial surgeries that are not medically necessary or beneficial to the animal, like declawing or ear cropping, but there hadn’t been a review done on this topic before in companion animals,” she said. “We wanted to get all the information in one place as a starting point.”

Mills worked on the review under the supervision of Professor von Keyserlingk, and Dr. Lee Niel from the University of Guelph. She hopes the review will result in discussions about the welfare concerns of these procedures and eventually legislation that will outlaw these procedures. While there are currently no federal laws in place to prevent tail docking or declawing, provincially we’re starting to see small changes; ear cropping was recently banned in BC.

“While we know that procedures like tail docking or declawing are painful, little research has been done to determine how much pain these surgeries are causing, but in many cases they are done without anesthetics or analgesics,” she said.

Some of these surgeries have been performed since ancient times. In the Middle Ages, tail docking was performed on hunting and fighting dogs to lessen the risk of injury to the tail and is still commonly performed on dogs of various hunting, working, and terrier breeds.

“Breed advocates often believe they should have the right to uphold the integrity of breed standards,” Mills said. “But ultimately, the goal should be to change how people view these procedures and hopefully then we change the need for these unnecessary surgeries.”