Faculty of Land and Food Systems
COVID-19 Information: For the latest information from UBC, please visit covid19.ubc.ca. Information for LFS students is available here. Resources for faculty & staff are available here.
» Home » Edible Packaging is as Good For Your Food as it is For the Planet 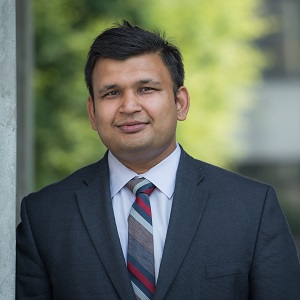 It’s near impossible to avoid plastic packaging in the food industry today. This type of packaging is often non-reusable and non-biodegradable, and when not disposed of correctly, can cause major impacts to the environment and wildlife.

Fortunately, research is being done to find alternatives. Innovations have been made in developing edible films, typically made from starch-based products such as potato, corn, green bean and tapioca.

B.C. Ministry of Agriculture Endowed Professor Anubhav Pratap-Singh is part of a team of researchers from the Food Science and Plant Science programs in the Faculty of Land and Food Systems looking to advance this research by adding the capacity to carry antioxidant compounds.

“Starch-based film is already low cost and has a smaller environmental footprint than plastic, but by adding antioxidants, we can further protect the food against oxidation, microorganism growth, browning and vitamin losses” said Dr. Singh.

In a study conducted last year, Dr. Singh’s team tested the development of starch-based edible packaging film incorporated with blueberry pomace powder. The powder is made from the leftover skin, pulp and seeds from blueberries after they are juiced – parts that are typically discarded, even though they are a rich source of vitamins, minerals, and fibres.

“We found that the addition of the powder did not negatively affect the colour, thickness or transparency of the film, nor did it change the structural integrity or strength,” said Dr. Singh. “It presented an all-around improvement to the quality of the food, suggesting the potential to be used in active packaging.”

The team’s results were published in the journal Foods, in November 2020.

The team will now focus on improving the strength of the film, and test it against different types of food.