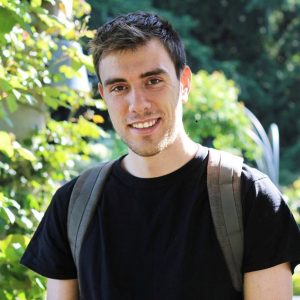 When meeting Cody Rector, it’s clear he has a strong passion for food.

A UBC Centennial Scholar, Rector is graduating with a double major in Food and Nutritional Sciences, finishing his undergraduate program a year earlier than most people. This fall, he plans to continue his study of food in UBC’s Master of Food Science program.

Rector will work under the supervision of Assistant Professor John Frostad, who is skilled at navigating through complex challenges to find novel solutions. Frostad’s research expertise combines chemical engineering and food science, and Rector has worked with him for the past two years.

“I’m excited to be allowed to play in this sandbox,” says Rector. “I did an undergraduate project with John on space food. Between my program and what I learned in research, it’s clear to me that nutritional sciences does a great job of identifying problems, while food scientists are equipped to actively solve those problems.”

Rector hopes to one day start his plant-based food production company. He’s already testing the waters, alongside a fellow classmate, to create a line of pickle products that he hopes to launch in the near future.

Before coming to UBC, Rector had earned his Red Seal in Culinary Arts in Prince Edward Island. However, when he looked ahead, he imagined long hours and relatively low pay if he stayed in restaurant kitchens, so he decided to pursue university.

“It was a simple decision to come to UBC. I didn’t have to think too hard about it. UBC has a strong food science program and, as a large university, I knew I could make connections to people and find opportunities.”

Indeed, Rector has made a number of connections. He is general manager of LFS’s Agora Café, where he was part of a small team that created a new governance structure to encourage food security for students and promote the long-term sustainability of the student-run business. Rector was also involved in other parts of campus as the co-president of the Food Science club, and a member of UBC’s Student Alumni Council.

As someone who has worked within the university environment to manage clubs and Agora Café, Rector has learned some secrets to keep initiatives moving forward. He says don’t be afraid to send emails and then knock on doors for answers – he’s never been turned down by someone when he knocked on their door and asked for a minutes of their time.