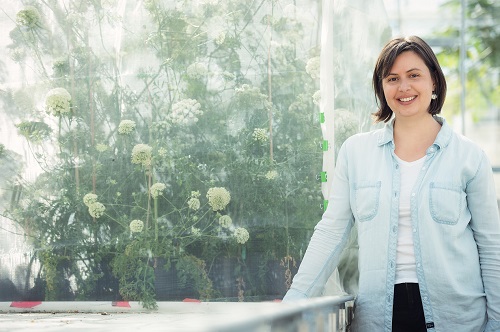 “Most carrots are grown in a few intensive production regions like California, which means there’s not as much incentive for the private seed sector to breed varieties for Canadian climates,” says Lyon. “Organic growers are a smaller proportion of the market in terms of who’s buying seed, but they still need varieties that are well-adapted to their systems. So there’s an opportunity to improve the productivity of organic farming through public plant breeding.”

Some of the biggest challenges that organic carrot growers report in B.C. are carrot rust fly, diseases like cavity spot, and finding fast-growing varieties with good flavour and appearance. This spring, Lyon and her team are making crosses between commercial carrot varieties and experimental lines developed by public plant breeders at the University of Wisconsin. Together with local farmers, they will select a new variety out of the crosses that hopefully combines the desired traits for organic growers.

For peppers, CANOVI is supporting a similar collaboration between a public plant breeding program at Cornell University and several Ontario farmers who have been selecting sweet bell peppers with a key trait for the North: a pepper that ripens earlier than any other on the market.

“At the end of the day, the goal is to develop several varieties or populations of peppers and carrots that Canadian farmers and seed growers can continue to adapt and improve upon in their farms,” adds Lyon.

The CANOVI project takes advantage of an on-farm variety trialling network that Lyon helped establish in a previous project, the BC Seed Trials, where she collaborated with local non-profit FarmFolk CityFolk.

Lyon and CANOVI’s collaborators are just getting started, but are optimistic that they will change things for Canadian organic farmers – one carrot and pepper at a time.

Find out more about CANOVI on the CSFS website at ubcfarm.ubc.ca.