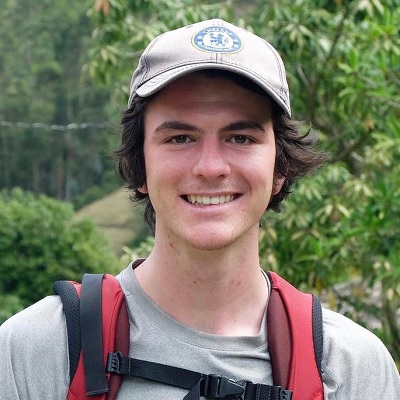 Dylan is an outstanding individual who achieved the top cumulative GPA in his class. While in the program, his focus was on sustainable agriculture and economics in the context of the Americas, and to round out his academic experience he went on exchange to the Université de Montréal.

The prize is named for Dylan’s father, George Kennedy, and it was established to recognize the senior Kennedy’s outstanding contribution in establishing international partnerships with UBC. He was the main architect behind the BSc Global Resource Systems (GRS) degree program and served as its first Program Director. George Kennedy is currently Associate Professor Emeritus in Land and Food Systems.

“Interestingly enough, looking back I realize that my Dad never insisted or pressured me to consider GRS,” says Dylan. “I started out in arts at UBC and it was only during my first and second years that I became more curious about the program he had made long ago, and started to think it might be a good fit.”

“It turned out to be an excellent fit and I am so glad to have been a part of the program and of Land and Food Systems. It helped me to study a variety of subjects I’m interested in, challenged me to take courses outside my comfort zone, and introduced me to lots of cool people.”

Dylan was originally reluctant to join the program due to its rigorous science requirements, but he ended up obtaining a first-class standing in every science-based course, as he did in every non-science focused course. According to GRS Program Director Les Lavkulich, Dylan is a true scholar.

In the near future, Dylan plans to move to eastern Canada and consider further studies.

“This summer I am planning on moving to Toronto and working for a year, and then the year after I will look into graduate programs related to food studies and food economics.”

Global Resource Systems is a second-year entry program that provides an understanding of natural and agricultural resources from an international perspective. Students take a breadth of courses in both the sciences and humanities, and co-design their programs by selecting a region of the world to study as well as a resource discipline, such as global health, international trade and development, sustainability and planning, among others.