Research on Delta farms can improve soil productivity and drainage 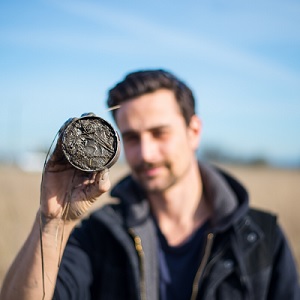 To investigate how to make farming more sustainable for Delta producers in light of these challenges, UBC’s Maja Krzic and Sean Smukler are running a five-year study evaluating the impacts of grassland set-asides on soils and crop yields in the Fraser River delta. A set-aside involves resting soil for one to four years by replacing cash crops with a mixture of grasses and legumes to improve the productivity of the land over the long-term.

As part of this study Jason Lussier (photo above, courtesy of Adrian MacNair), a recent MSc graduate from the UBC Soil Science Program, led a study of eight fields in the set-aside program to evaluate the influence on soil structure and compaction, which are key for crop productivity. The Canadian Journal of Soil Science has published this research, providing important findings that will assist producers in the Fraser River delta to integrate grassland set-asides more effectively into their farming operations.

They discovered farmers who enrolled fields that were productive saw improved soil productivity after two seasons in the grassland set-aside program. Those who enrolled fields that were highly degraded with very little, if any at all, vegetation saw different results. As vegetation is largely what provides restorative benefits to the soil, as expected, the highly degraded fields did not show any differences in soil properties after two seasons in the program.

These finding support using grassland set-asides on productive fields in the Fraser River delta region for a duration of two seasons as a crop rotation practice to improve soil productivity. Degraded fields likely require additional management practices, or a longer period of enrollment, before seeing improvements.

The team was also able to identify sodium levels in soils as a good indicator for determining which fields may or may not be suitable for the program. Much of the farmland in the Fraser River delta is surrounded by ocean, and some fields in the region are vulnerable to the accumulation of ocean salts, such as sodium, either through ocean water intrusion or salt contamination in irrigation water. High levels of sodium are highly toxic to plants and may also be an indicator underlying drainage issues – both of these factors can severely hinder vegetation growth and may lead to highly degraded farmland.

The research team set preliminary thresholds of soil sodium levels that will be of practical value to farmers in determining which fields should be incorporated into the Grassland Set-aside Stewardship Program and which fields likely need other management practices to address land productivity issues prior to being enrolled in this program. Salinity-related issues are projected to increase in Delta due to climate change-induced sea level rise and this preliminary work may also provide a foundation for future studies that will evaluate the impacts of this important soil property on crop production.

Having grown up in the Fraser River delta region of B.C., Lussier is proud to have been part of this research, which will contribute to a productive agricultural industry in the region for the benefit of both farmers and the community.

Lussier has been Coordinator of the BC Agricultural Climate Adaptation Research Network for the last two years. He has worked with researchers, industry specialists, policy-makers, farmers and ranchers from across the province to promote cross-sector collaboration in the development of a climate-resilient agriculture sector.

This research was carried out in close collaboration with DF&WT, a local organization that provides farmers in the Fraser River delta region of B.C. with cost-share payments to undertake land management practices that promote both wildlife conservation and sustainable agricultural operations.

DF&WT funds the Grassland Set-aside Stewardship Program so farmers in the region can rest their fields under a grass and clover stand for up to four years. UBC researchers have been collaborating with the DF&WT for more than 25 years. This study is just one example of how academic cooperation with external partners can provide applied research findings that directly contribute to the local farming community.

The primary funder of this grassland set-aside project was Agriculture and Agri-Food Canada (AAFC). DF&WT, Mitacs, NSERC and UBC have also contributed funding to the project.