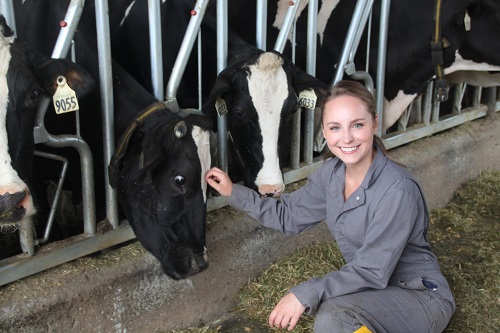 That urge you get to scratch an itch? It turns out dairy cows have it too.

“In a naturalistic environment, cows will groom and scratch themselves on trees and other abrasive surfaces. Modern, indoor housing systems do not typically have access to similar resources with which they can groom,” said McConnachie. “It was previously unknown whether this mattered to them, and this study sought to find an answer.”

The study was made possible due to an Undergraduate Student Research Award (USRA) from the Natural Sciences and Engineering Research Council of Canada (NSERC), which McConnachie received in 2016.

She set up mechanical brushes behind a weighted gate that the cows could push with their heads to gain access. The weights were gradually increased over time, meaning that cows increasingly paid a higher price to access the brush. An identical set up was used with fresh feed behind the gate.

“In this study, we found that cows were willing to work as hard to access the brush as they were to access fresh feed. This allowed us to conclude that cows are highly motivated to use a mechanical brush and that it is a very important resource to them.”

The study was published in Biology Letters in August, and was picked up by media outlets such as the New York Times, the National Post, and CBC News.

“My goal was to have a positive impact on improving the lives of animals. By pursuing research in farm animal welfare, there is tremendous potential to create change and consequently improve billions of animal lives.”

The following year, McConnachie received a Mitacs Globalink Research Award, which took her to Florianópolis, Brazil, for four months where she was part of a research collaboration investigating public attitudes towards genetically modifying agricultural animals to have better welfare. The findings of this study will be published next spring.

McConnachie went on to receive a second NSERC-USRA before graduating from the Faculty in 2018. She is currently in a doctoral law degree program at the Northwestern Pritzker School of Law in Chicago, IL.